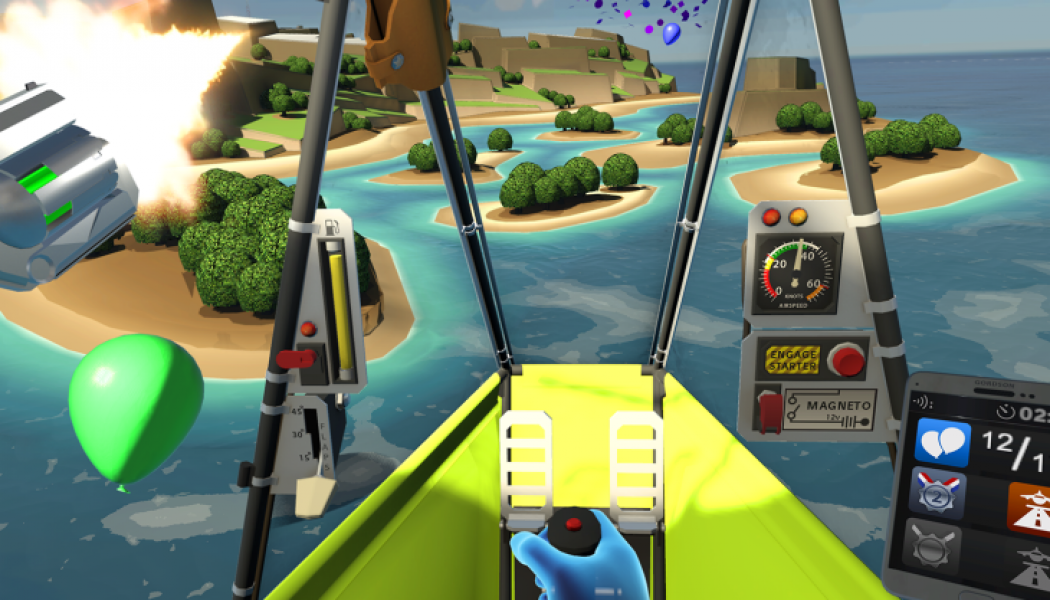 It’s been awhile since we last checked in with info about our upcoming Oculus Rift + Oculus Touch game, Ultrawings.  Now’s as good a time as any to discuss the game in greater detail as we get closer to release.

Ultrawings is an open-world, aerial-themed game where you pilot multiple aircraft to complete a variety of jobs across an island-themed world.  The game is powered by the ubiquitous Unity game engine and, initially, supports Oculus Rift, Oculus Touch, and gamepads.

What other platforms will Ultrawings release on?

We’ve only announced Rift support at this time.

What aircraft are featured?

We currently feature 3 very distinct aircraft – the Ultralight, an experimental Glider, and an acrobatic Sport Plane.

Yes but an accessible one!  All of our aircraft are governed by a realistic, flight simulator engine but we’ve made many modifications so that each aircraft is really fun to fly.  Also, the type of jobs you will take on in the game are most definitely not realistic in anyway.  When was the last time you flew an Ultralight and pop giant balloons with a dart gun?

But that’s one of the amazing benefits of virtual reality!   We’ve accurately replicated the feeling of flight but also incorporated somewhat ridiculous things you get to do while flying that just wouldn’t be possible in real life!

What are my control options?

Gamepad and Oculus Touch.  But, honestly, we highly recommend playing the game with Oculus Touch as it’s, without a doubt, the most immersive way to play the game.  There is a bit of a learning curve as even hardened flight sim enthusiasts have never quite flown an aircraft like this before but once you’ve mastered the controls you’ll quickly realize that it’s the only way to play the game.

What do you do in the game?

The core loop of the game is complete jobs, earn in-game cash based on job performance, and then buy new airports and new airplanes.  Every time you purchase a new airport we unlock a new job type.  When you purchase new aircraft more jobs become available too!  Suffice to say we have a wide variety of jobs that you’ll get to choose from!

There is a progression path but we let you choose which jobs you want to focus on.  You won’t need to complete every single job to unlock all content in the game.

How about simulator sickness?

Yes, unfortunately, this is a very real phenomenon and it’s something we’ve spent a significant amount of time looking at ways to help players out.  We’ve implemented multiple comfort setting options as well as a simpler aircraft physics model that prevents the aircraft from rolling (the aircraft will just yaw when you attempt to bank).

Also, we can’t explain why this is the case but many players (myself included) have commented that using Oculus Touch actually helps with simulator sickness since you are actually simulating the hand controls of flying aircraft.

We’ll update this post with more answers in the coming days.  If you have a question please don’t hesitate to drop us a line at chris@bitplanetgames.com